Now it’s time for the final countdown to Christmas – these final five games I have played, alot and they are all excellent and festive to boot. 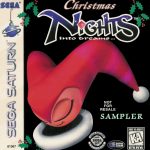 Nights is a Saturn classic, infact a modern day gaming classic and a game that if you have not played you should seriously seek out to enjoy, it’s a bitch at first until you get the controls before it turns into a mesmerising magical adventure.

Anyway what is so special about this Christmas special edition? Well for starters for 364 days a year most of it’s goodness is locked away, it actually uses the clock on the Saturn and on Christmas day it comes alive! Everything transforms into Christmas related objects,  the Ideya captures are now Christmas trees, the world is covered in fairy lights and baubles and collectible stars become bells ringing out a festive peal. The main character himself is suddenly clad in a red and white onesie, while Santa can be seen dropping presents from his sleigh – all only if you play on Christmas Day! 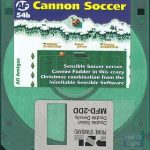 When Sensible software were asked to do a Christmas coverdisk game (it really was the golden age of cover disk Christmas games!) someone thought, what would happen if you cross Sensible Soccer & Cannon Fodder.  Well the game is technically more a two level promo demo of Cannon Fodder, but you start off on the football pitch (Soccer for our American friends)  and fight your way across the pitch into some suitably Christmas themed Cannon Fodder levels. If you love Cannon Fodder (and who doesn’t) then this is a fun Christmas themed mini demo, for me the lack of Christmas music knocked it a few places down the list but it’s still a great bit of fun and as my mate Stoo would say – it’s sensitastic ! 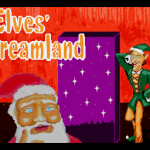 Now I am a sucker for Jet Set Willy type games, now combine a Jet Set Willy, with Christmas, on an Amiga – well my festive cup runs over!

This is a new Amiga game coming out in 2015 (See here on the english amiga board).

Guys still making games for these old computers deserve a lot of respect, instead of knocking out a mobile game to make a few quid they let passion lead the way and create some great content.

Now I will admit the music hurts my ears on this game, but the graphics are well drawn and cutesy – however it is the level of detail of recreating bits from other games (See creators website here) that is fantastic. Well done, and to those that now tried it give it a whirl this Christmas. 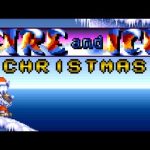 Today marks out penultimate game. (Yes I know some Advent Calendars end on the 24th, but some end of the 25th as well).

Anyway this being the penultimate game, it is a real Christmas cracker!

Now Fire & Ice is one of the few Amiga platformers that I actually like, so to get a Christmas special version was a real treat. Release in 1992 on an Amiga Power cover disk (Yep another!) , this is a set of specially created Christmas themed levels using the same game engine. The graphics as per usual Graftgold are superb, ton’s of extra detail and flourishes have been added to make it all more festive.

An essential play for any Amiga fan this holiday period. 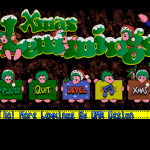 Lemmings is probably one of the greatest Amiga games ever created, no Amiga owner in existence has not played this game at some point and was so popular even parents were kicking kids off the ‘miggy to have a go. Combining cute graphics, tough logical puzzles and the need for quick reactions it was a perfect venn diagram of game design.

As the final game should be, this was another coverdisk special this time with Amiga Format. ( loved the Amiga coverdisk era. a time that has yet to be matched for getting fun and quirky stuff out to the general public.

So popular was Xmas lemmings, for the next three years further holiday editions were released (Xmas Lemmings ’92 , Holiday Lemmings 93 & 94) with the later ones being commercial releases according to HOL (Click here). So with this final game I wish you all Happy Holidays !