It’s time to finally pick a theme for the game, as mentioned in blog zero (Click here) I am pulling inspiration for a number of sources.
Looking back through those games one keeps calling out to me – Lotus 2 on the Amiga.
The long flowing tracks with checkpoints, racing to get to first place by the end of the level against proper speed opponents to me is more satisfying than the Outrun cars are just mobile chicanes to negotiate along the way.
However the levels I like the most are the dirt/snow levels.
So not being stuck with a Lotus theme I have decided to theme the game more ‘Rallyesque’ where you are racing a rally car, against other Rally cars along a variety of stages to try and end up in first place.
I have also been playing Big Run – not a great game but interesting concepts.

So todays goal is to get a car on the screen with a nice parallax backdrop, if I can I would love to theme the road as well – but graphics tend to take 50x longer than I hoped.
I have the 3d models for the cars so I now need to get on and render them into sprites.
Why 3d models for a 2d esque racing game, well it allows me to generate an infinite number of frames and angles and will give the game a newer crisper feel whilst still feeling retro (IMHO).
So without further delay I will get rendering and tweaking, I doubt this week will have the most text or the most code written but something more visually appealing should pop out the other end !

So that was a full day of rendering.
I have three layer parallax scrolling and a car that is badly rendered with poor edging (see picture) as I used an online renderer, need to redo them all in Autodesk. But it does animate as you steer.
It looks pretty good moving but as I have connection issues it will just have to end with a picture.
It won’t be until I get objects at the side of the road (a few weeks down in the plans) that it will look significantly better. 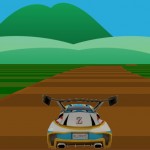 At this stage of development things start to look slower as all the big gains have been had with a one day a week project !!!
Next weeks plan to is add the ability to go from wider to thinner roads and back again.