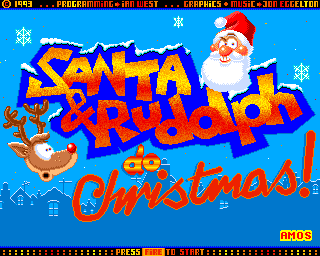 Ho-ho-ho and welcome to this second exciting instalment in my Retro Gaming Advert Calendar, this time taking you from the 11th to the 20th December.

So grab your Quality Street tin and a cup of tea and get ready for some more crazy Christmas crackers. 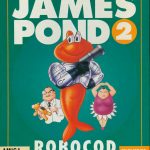 This game is great fun and it captures the joy of Christmas. Each level has a glorious Toy box theme and throughout the game you will liberate elves, defeat evil snowmen and collect penguins (Mcvities, so tasty Chocolate ones!)

The sugar coated graphics and delightful tunes fill you with Christmas joy for the entire holiday period. Dreamkatcha (The gangster from Manchester) on the Amigos Podcast rates Robocod as one of the greatest Amiga games around, whilst it doesn’t make my top twenty I do agree it’s a fun game. 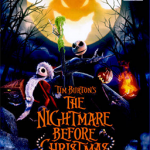 Some argue if the PS2 is retro, it came out in year 2000, that is 16 years old. In 2000 no one saw the NES (just 15 years old at the time) as modern so for me it’s retro despite the polygon madness. Now this is a BIG game, a giant game with amazing production values and is the true sequel to the movie. If you have never played this game I urge you to try it out. 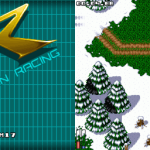 This little known piece of obscura (See here for details) for the Amiga is a special Christmas version of the Amiga racing classic released on a cover disk with Amiga Action and Amiga Format magazines. It’s your standard ATR fun but all snowy graphics and jingle bells a plenty in the music to make you merry all day. 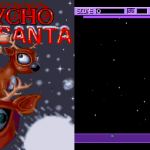 This is another Amiga cover disk game, this time from Amiga One magazine. It really was a golden time for free Christmas related games. In this game you start by trying to throw presents in the house whilst dodging all sorts of weird enemies whilst even throwing snowballs at the ghost of Christmas past, if you succeed you are given a bonus level of trying to grab presents off a tree whilst bouncing on a pogo stick (What was the designer smoking??)

This sequence just repeats and gets harder, ranked high as I love the pogo stick! 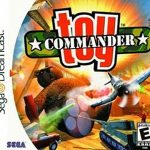 After that weird cover disk madness comes this polished little festive level to the lovely Toy Commander game for the SEGA (SAAAAY-GA!) Dreamcast. If you ever wondered what it would be like to control Santa on a jetpack, well you are in luck my friends. Sometimes a video speaks a thousand words, so sit back watch the video and then if you got a Dreamcast get the ISO. 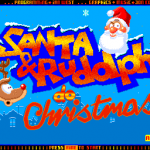 This game has it all, festive music, annoying Merry Christmas sound samples, Santa flying around holding onto a balloon shooting birds and flying penguins with propellers on their heads. It is essentially a single screen collect & shoot with lots of deliciously themed levels. An entertaining way to pass 5 mins before the music makes you want to set fire to Santa’s beard. 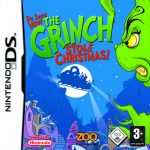 Released to coincide with 2000’s terrible Ron “Richie Cunningham” Howard movie with the only rarely funny Jim Carrey as the Grinch. Now time to confess, I am British I have no idea on any of this Dr Seuss stuff, it just not travelled over the pond. Therefore I have no idea about this weird grinch fella and all his antics but the American’s seem to lap this stuff up. So the game …. it’s a 2d side on adventure puzzler where you attempt to steal Christmas. It’s a bit dull, a bit repetitive but I know someone who worked on it and hated every minute so I thought I would include it as that fact makes me smile. 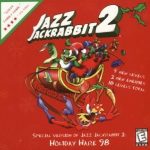 Jazz Jackrabbit (In no way a rip of Bucky O’Hare – honest!) was an early PC success story. The game is a side on platformer that tries to emulate Sonic for speed, but ends up half way between Sonic and Zool.

A notable part of this game is the mode-7 style first person sections that look like an mushroom trip of Super Mario Kart.  Now for some reason I have always been a fan of this game, despite not having an original bone in it’s green bunny body it plays well, it’s slick, the sound is good and the graphics are bright and colourful. So this Christmas edition where they have spent an extraordinary amount of time to get the Christmas detail is just great. 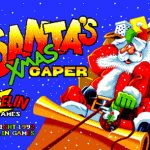 Another day, another free cover disk Amiga Christmas game. It truly was the era for free Christmas themed giveaways. Now this enjoyable side on platformer has you controlling the big man (Santa – I know him!)

Santa seems to have an gravity defying jump and you have negotiate your way across the roof tops avoiding killer moons, turkey shaped helicopters and Snails with baubles for a shell- all you are armed with is unlimited snow balls. Now ignoring the copper field backdrop (lazy!) this is a colourful and fun Christmas themed game. Like to many Amiga games the first level is ridiculously difficult but level 2 is a breeze and each level has Christmas themed music to hum along to. 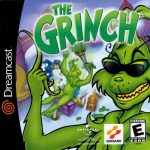 Lets end this instalment with that ruddy weird Grinch guy!. Now I am bit into my Sega Dreamcast at the moment, so this may be the reason this game features. This if I am honest is not the best game, simply because it is ridiculously easy, but after playing Amiga games sometimes you need to be reminded that it is possible to complete a game once in a while. It’s basically a Grinch Christmas themed scavenger hunt that is fun for a quick 30 mins blast but don’t go paying silly Dreamcast prices for this one.

Well come back on the 21st for the final instalment of festive fun, with the best saved till last 🙂